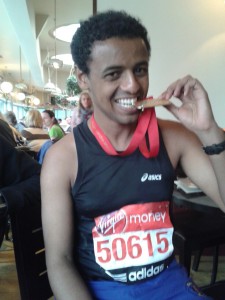 Two Eritrean athletes graced Virgin London Marathon 2013 – Yared Asmerom and Emmanuel Soquar, both did Eritrea proud! The two compatriots were not exactly running side by side as their missions, though similar, were not the same?

Yared who belongs with the elite top 10 runners was there to sustain Eritrea’s place on the racing map. Seventh in line, he finished in  2 hrs. 8 minutes and 22 seconds

Emmanuel ran his first ever marathon and completed the race, with a smile, despite hamstring injuries. He is supporting ERA-UK’s project for children with Autism and Down’s syndrome in Eritrea.  So far, he has raised £2173.75 REMARKABLE.

Support for Emmanuel is ongoing through his page at

ERA-UK is grateful for your cheers at the Marathon and your kind donations.