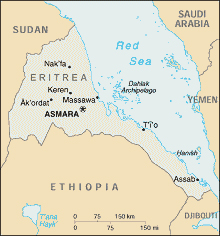 Eritrea, colonised by Italy from 1891, became a British protectorate in 1941. In 1950 the UN resolved to federate Eritrea under the Ethiopian crown against the wishes of the Eritrean people.

In 1962 Â Ethiopian Emperor Haile Selassie annexed Eritrea and made it the 14th Ethiopian province. This led to the start of the longest armed struggle for liberation in Africa.

In May 1991 the Eritrean People’s Liberation Front (EPLF) liberated Eritrea from the Ethiopian Dergue regime and on 24th May 1993, following a referendum where 99.8% including those in the diaspora voted for independence, Eritrea became a sovereign state